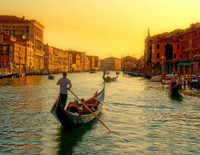 Santa Lucia numbered musical notation and stave are corresponding completely, which is the specified track for EOP Demon Training Camp and also suitable for his members to practice!

Santa Lucia
is a traditional Neapolitan song. It was transcribed by Teodoro Cottrau and published by the Cottrau firm, as a "barcarolla", at Naples in 1849.

Cottrau translated it from Napuletano into Italian during the first stage of the Risorgimento, the first Neapolitan song to be given Italian lyrics. Its transcriber, who is very often credited as its composer, was the son of the French-born Italian composer and collector of songs Guillaume Louis Cottrau. The Neapolitan lyrics of "Santa Lucia" celebrate the picturesque waterfront district, Borgo Santa Lucia, in the Bay of Naples, in the invitation of a boatman to take a turn in his boat, to better enjoy the cool of the evening.