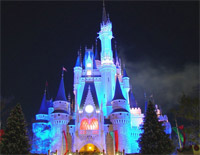 Christmas Canon is a Christmas song by the Trans-Siberian Orchestra from their 1998 album The Christmas Attic. It often ranks on the iTunes Top 100 Chart at Christmas time.


The song is set to the tune of Johann Pachelbel's Canon in D Major with new lyrics added. The style is a departure from TSO's usual rock arrangements, instead being performed in the style of a children's choir with light accompaniment from piano and strings. The group's rock version is entitled "Christmas Canon Rock", which debuted on their 2004 album The Lost Christmas Eve.


Christmas Canon is well known by people and if you like it, you can also download free Christmas Canon sheet music to play with Everyone Piano. Just Enjoy It!


Meanwhile, we also offer another Christmas Song Winter Wonderland sheet music for you to download