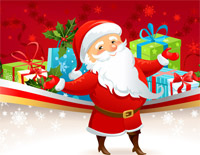 Santa Claus is composed by  Robert Schumann, sometimes known as Robert Alexander Schumann, who was a German composer, aesthete and influential music critic. He is regarded as one of the greatest and most representative composers of the Romantic era. Schumann left the study of law to return to music, intending to pursue a career as a virtuoso pianist. He had been assured by his teacher Friedrich Wieck that he could become the finest pianist in Europe, but a hand injury ended this dream. Schumann then focused his musical energies on composing.


"Santa Claus" is well known by people and if you like it, you can also download free Santa Claus sheet music to play with Everyone Piano. Just Enjoy It!