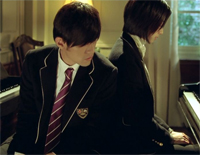 The Episode of Screct Introduction

Secret, is a 2007 Taiwanese film. It is the directorial debut feature film of Taiwanese musician Jay Chou, who also stars as the male lead and co-wrote the movie. In 2007 it received six nominations at the 44th Golden Horse Awards and won Outstanding Taiwanese Film of the Year, Best Original Song for Secret by Chou and Best Visual Effects. It was also nominated for Best Asian Film at the 27th Hong Kong Film Awards in 2008.

The Secret Original Soundtrack was released by JVR Music on 13 August 2007. This is one of the piano battles between Jay Chou and other guy, and it is included in the original soundtrack.

The Episode of ScrectPDF File