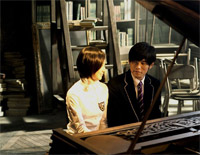 Jay Chou announced that he has started the filming process to the sequel of his directorial debut Secret/A Secret That  cannot Be Told, collaborating with his lifelong friend Will Liu. It has been released in 2007.