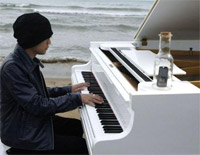 Free Turkish March piano sheet music is provided for you. So if you like it, just download it here. Enjoy It!

Turkish March is one of Mozart's best-known piano pieces and this is a adapted version by Jay Chou who is a Taiwanese singer, songwriter, record producer and actor.

And Turkish March is from The Piano Sonata No. 11 in A major, K. 331 (300i) which is a piano sonata in three movements. It is uncertain where and when Mozart composed the sonata; however, Vienna or Salzburg around 1783 is currently thought to be most likely (Paris and dates as far back as 1778 have also been suggested).