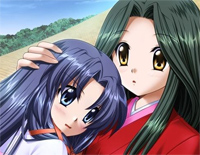 "Tori no Uta" (鳥の詩?, lit. "Bird's Poem") is a Japanese trance song sung by Lia, written by Jun Maeda, composed by Shinji Orito, and arranged by Kazuya Takase. The song was recorded at Paramount Studio in Los Angeles by the visual novel studio Key through their record label Key Sounds Label for use as the opening theme of Key's 2000 visual novel Air. A short version of the song was first released on I've Sound's July 2000 compilation album Verge. The full version of "Tori no Uta" first appeared on the limited edition remix album Ornithopter (September 2000) originally bundled with the first printing release of the Air game, though "Tori no Uta" was not remixed on the album. The song was later widely distributed on the Air Original Soundtrack (2002), the soundtrack of the visual novel. The song was later featured as the opening theme to the Air anime series in 2005. The Japanese variety radio show Moteken used "Tori no Uta" as the ending theme to their October 15, 2007 broadcast.


"Tori no Uta" is well known by people and if you like it, you can also download free Tori no Uta sheet music to play with Everyone Piano. Just Enjoy It!