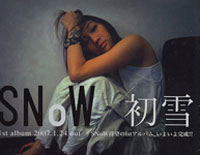 The First Snowflakes for Bandari who released its first album in 1990 and has published over 20 albums all around the world. China's Jingo Records has now released 13 of Bandari's albums.

Bandari never published its members' names and it was asserted by Bandari fans that this was because its members did not want to be famous. Further, the fact that Bandari as a music band is only known in China and Taiwan caused people in these regions to doubt the very existence of this group. Music fans recently concluded that Bandari is a commercial project initiated by Taiwan music companies, instead of being a music band.
Compared with other New Age Music musician such as Yanni, Kitaro or Enigma, Bandari produces music with slower and softer rhythm. Many people relax by listening to Bandari's music.