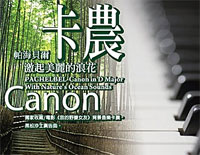 Canon In G numbered musical notation and stave are corresponding completely which is suitable for EOP Demon Training Camp members to practice!


Canon In G is another version of Canon that is composed by Johann Pachelbel. Pachelbel's music was influenced by southern German composers. His music is less virtuosic and less adventurous harmonically than that of Dieterich Buxtehude, although, like Buxtehude, Pachelbel experimented with different ensembles and instrumental combinations in his chamber music and, most importantly, his vocal music, much of which features exceptionally rich instrumentation. Pachelbel explored many variation forms and associated techniques, which manifest themselves in various diverse pieces, from sacred concertos to harpsichord suites.

This music is well known by people and if you like it, you can also download free Canon In G sheet music to play with Everyone Piano. Just Enjoy It!

Meanwhile, we also offer different version of Canon sheet music for you to download