Castle in the Sky-Moderate Version 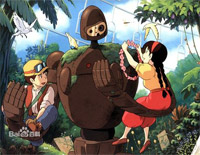 Castle in the Sky-Moderate Version Introduction

Castle in the Sky is composed by Mamoru Fujisawa, known professionally as Joe Hisaishi , who is a composer and director known for over 100 film scores and solo albums dating back to 1981.

While possessing a stylistically distinct sound, Hisaishi's music has been known to explore and incorporate different genres, including minimalist, experimental electronic, European classical, and Japanese classical. He is best known for his work with animator Hayao Miyazaki, having composed scores for many of his films.

Meanwhile, we also offer Castle In The Sky-Super Simple Edition sheet music for you to download