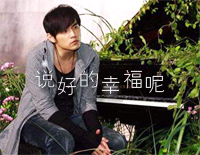 Promised Happiness is a song by Taiwanese musician and singer Jay Chou. The music video was directed by Chou and co-stars Chou and Taiwanese actress Chen Kuangyi. Meanwhile, the song is listed at number 56 on Hit Fm Taiwan's Hit Fm Annual Top 100 Singles Chart (Hit-Fm年度百首單曲) for 2008.

And Promised Happiness is from his ninth Mandarin studio album Capricorn which was released on 14 October 2008. The album is based on his zodiac sign, Capricorn and his interest in illusion. Like Chou's previous album, On the Run, this album was also leaked on the internet prior to the scheduled release date.