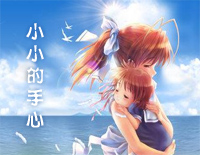 "Small Palms" is one of episodes of "Clannad" animated television series which is based on the visual novel Clannad by the Japanese visual novel brand Key. The story follows the main character Tomoya Okazaki, a discontent high school student whose life changes when he meets a girl one year older than he is, named Nagisa Furukawa.

The episodes including "Small Palms", produced by the animation studio Kyoto Animation, are directed by Tatsuya Ishihara, written by Fumihiko Shimo, and features character design by Kazumi Ikeda who based the designs on Itaru Hinoue's original concept.

This is the story when "Small Palms" music come out:

After failing to create a flying machine to travel to an alternate world, the Girl in the Illusionary World is dying in the snow, and the Junk Robot, created by the girl, regrets having her take the journey. The girl can finally hear the robot, and tells it that they once existed in another world. As she hums the tune of "Dango Daikazoku", the illusionary world starts to collapse. As the robot is swept away, the girl calls him "Daddy" and disappears with the world. Back at the school hill in the past, the robot and Tomoya become one, he calls after Tomoya and the robot note the end of his long journey. Tomoya awakens to Ushio's birth, but this time, Nagisa miraculously survives. After Nagisa watches Tomoya give Ushio her first bath, she and Tomoya see that countless orbs of light are floating throughout the city outside the window. They both sing to Ushio and from then on, Tomoya and Nagisa experience a happy life raising their daughter together as a family, finally free of their cursed fate. Later after five years, Fuko and Kouko are walking to the new hospital to get a checkup. Fuko goes into the woods and spots the Girl in the Illusionary World sleeping under a tree. When she approaches, it turns out to be Ushio; Fuko says that she would like to be friends, and that the fun is just getting started.

Meanwhile, Small Palms music sheet is provided for you.