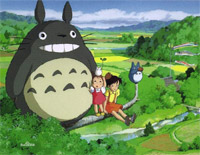 Free Tonari no Totoro piano sheet music is provided for you. So if you like it, just download it here. Enjoy It!

Tonari no Totoro
is used as the ending theme to 1988 Japanese animated fantasy film My Neighbor Totoro. The film – which stars the voice actors Noriko Hidaka, Chika Sakamoto, and Hitoshi Takagi – tells the story of the two young daughters (Satsuki and Mei) of a professor and their interactions with friendly wood spirits in postwar rural Japan. The film won the Animage Anime Grand Prix prize and the Mainichi Film Award for Best Film in 1988.

And Tonari no Totoro is performed by Japanese singer Azumi Inoue with lyrics by Hayao Miyazaki.