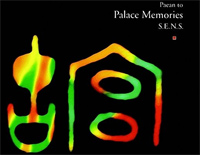 Palace Memories was the 1st soundtrack from NHK TV documentary Forbidden City. It was released on July 24, 1996.

Palace Memories piano was composed by S.E.N.S. who is a Japanese new age instrumental group formed in 1988, originally with two members. The name stands for "Sound, Earth, Nature, and Spirit" based on their spiritual policy. Their albums have also been released in European and Asian countries. In Japan, the album Tomei na Ongaku was awardedsecond prize for "Instrumental Album of the Year" in the 2001 Japan Gold Disc Award.

Also, they have produced many musical scores for TV dramas, documentaries, and movies in Japan, also making it into the anime scene with the score for xxxHolic. And Palace Memories was one of their famous works.