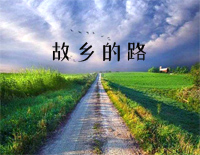 COUNTRY ROAD is the theme song of "Whisper of the Heart" which is a 1995 Japanese animated drama film directed by Yoshifumi Kondo and scripted by Hayao Miyazaki based on the 1989 manga of the same name by Aoi Hiiragi.

COUNTRY ROAD was composed by Yuji Nomi. Throughout the film, Shizuku creates translations of John Denver's song "Take Me Home, Country Roads" into Japanese for her school's chorus club. She also writes her own humorous Japanese version of the song, called "Concrete Road," about her hometown in western Tokyo. "COUNTRY ROAD" were actually translated by producer Toshio Suzuki's daughter Mamiko with Hayao Miyazaki writing supplemental lyrics. These songs play a role at various points in the story. A recording of "Take Me Home, Country Roads", performed by Olivia Newton-John, plays during the film's opening sequence. The song was also performed by Shizuku's voice actress Yoko Honna.