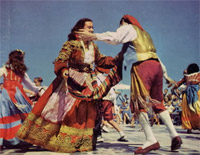 Beer Barrel Polka, also known as Roll Out the Barrel, is a song which became popular worldwide during World War II. The music was composed by the Czech musician Jaromír Vejvoda in 1927.

The polka became famous around the world. In June 1939, "Beer Barrel Polka", as recorded by Will Glahé, was #1 on the Hit Parade. The Australian Rugby League Football Club, Cronulla-Sutherland Sharks has a club song known as 'Sharks Forever' which is sung to the tune of Beer Barrel Polka.