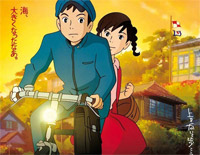 "Summer of Farewells" (さよならの夏 ~コクリコ坂から) is the theme song of "From Up on Poppy Hill" (コクリコ坂から Kokuriko-zaka Kara, lit. "From Coquelicot Hill") which is a 2011 Japanese animated drama film directed by Gorō Miyazaki, scripted by Hayao Miyazaki and Keiko Niwa, and produced by Studio Ghibli. It is based on the 1980 serialized Japanese comic of the same name illustrated by Chizuru Takahashi and written by Tetsurō Sayama.