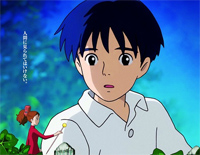 "Arrietty's Song" performed by French (Bretonne) recording artist musician Cécile Corbel is the theme song of Arrietty, classified under the titles The Borrower Arrietty (借りぐらしのアリエッティ Kari-gurashi no Arietti) in Japan and The Secret World of Arrietty in North America which is a 2010 Japanese animated fantasy film directed by Hiromasa Yonebayashi and scripted by Hayao Miyazaki and Keiko Niwa. Corbel also performed , "Arrietty's Song", in Japanese, English, German, and Italian.

The song made its public debut in a presentation of the song by singer Corbel and percussionist Marco in Apple's store in Shibuya, Tokyo, on August 8, 2010. Some of the Japanese theme songs for this film, including "Arrietty’s Song" was first released online through the iTunes Store, mora and Musico on December 19, 2009. Subsequently, the official album containing all of the theme songs of this film was released on July 14, 2010. The album's listing on the Oricon charts peaked at the 31st position. Separately, the song "Arrietty’s Song" was released as a singles album on April 7, 2010. Download Arrietty's Song music sheet now!