Guren no Yumiya-Attack on Titan OP 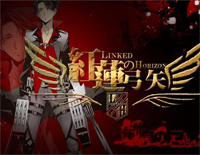 01:38
Guren no Yumiya, Played with Everyone Piano Keyboard Piano

Guren no Yumiya (紅蓮の弓矢, Bow and Arrow of Crimson) is the opening theme song of Attack on Titan (進撃の巨人 Shingeki no Kyojin) which is 2013 anime series based on the manga by Hajime Isayama serialized in Bessatsu Shōnen Magazine.

And Guren no Yumiya is performed by Linked Horizon. Sound Horizon is a Japanese musical group with composer Revo as the leader. They call themselves the "fantasy band" and have released their works that closely resemble suites.