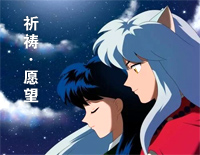 }
Free Pray & Wish piano sheet music is provided for you. So if you like it, just download it here. Enjoy It!

Pray & Wish is the OST of InuYasha the Movie: The Castle Beyond the Looking Glass which is the second movie of the InuYasha movie series. It was released in Japan on December 21, 2002 (between episodes 95 & 96), and in the United States on December 28, 2004. In this film, the character designs are virtually identical to the Rumiko Takahashi versions from the original manga (rather than using the Yoshihito Hishinuma designs from the TV anime).