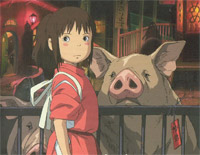 The Sixth Station is the OST of Spirited Away (Japanese: 千と千尋の神隠し Hepburn: Sen to Chihiro no Kamikakushi, "Sen and Chihiro's Spiriting Away") which is a 2001 Japanese animated fantasy film written and directed by Hayao Miyazaki and produced by Studio Ghibli. The film tells the story of Chihiro Ogino, a sullen ten-year-old girl who, while moving to a new neighborhood, enters an alternate reality inhabited by spirits and monsters. After her parents are transformed into pigs by the witch Yubaba, Chihiro takes a job working in Yubaba's bathhouse to find a way to free herself and her parents and escape to the human world.