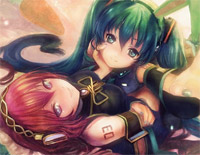 Hatsune Miku (初音ミク?) is a singing synthesizer application with a humanoid persona, developed by Crypton Future Media. Megurine Luka (ボーカロイド Bōkaroido?) is a singing voice synthesizer. Its signal processing part was developed through a joint research project led by Kenmochi Hideki at the Pompeu Fabra University in Spain in 2000 (the same team that later founded Voctro Labs[1]) and originally was not intended to be a full commercial project.