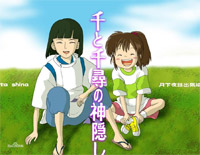 Always with me numbered musical notation and stave are corresponding completely which is suitable for EOP Demon Training Camp members to practice!


Always with me is used as the theme song of Spirited Away. Spirited Away is a 2001 Japanese animated fantasy film written and directed by Hayao Miyazaki and produced by Studio Ghibli.


Always with me was composed and conducted by Miyazaki's regular collaborator Joe Hisaishi, a composer and director known for over 100 film scores and solo albums dating back to 1981.

And the song was intended to be used for Rin the Chimney Painter, a different Miyazaki film which was never released. In the special features of the DVD, Hayao Miyazaki explains how the song in fact inspired him to create Spirited Away.

Meanwhile, we also offer different version of Always with Me sheet music for you to download

The Lyrics of Always With Me: