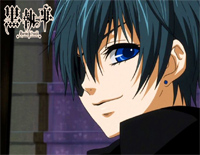 "Bird" is sung by Yuya Matsushita (松下優也 Matsushita Yūya?), born May 24, 1990 who is a Japanese R&B and Hip Hop singer under Epic Records Japan. His debut single "foolish foolish" was released on November 26, 2008. He had his first breakthrough as Sebastian Michaelis in the Black Butler Musical and since then, been popular in both Japan and overseas.