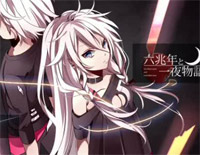 Roku Chōnen to Ichiya Monogatari is one of EXIT TUNES Licensed songs for Sound Voltex which is a new series of music games by KONAMI. It was tested on various cities in Japan starting on August 26, 2011 until September 19, 2011.[1] It was then released on January 18, 2012.


Roku Chōnen to Ichiya Monogatari was uploaded on April 11, 2012, and has reached over 3,000,000 views. The song tells of "a fairytale that no one knows" about a demon boy with no name, abused by his mother, and who only wanted to be human. He wants to die, and he can't see any dreams in his future. One day, a girl came to the prison where he was held. Although talking was forbidden, she asked him what his name was, and said that they would leave together. They do, and despite the fact that they know nothing about each other, they are happy, and it is just the two of them.

And if you like this song, you can also download Roku Chōnen to Ichiya Monogatari sheet music to play with Everyone Piano. Just Enjoy It!