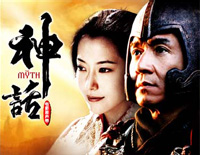 The Myth numbered musical notation and stave are corresponding completely which is suitable for EOP Demon Training Camp members to practice!


The Myth was performed by Jackie Chan and Kim Hee-sun.

And it is also the theme song for a 2005 Hong Kong martial arts-fantasy-adventure film The Myth which was directed by Stanley Tong, starring Jackie Chan, Tony Leung Ka-fai, Kim Hee-sun and Mallika Sherawat.

The movie was released in Hong Kong on September 23, 2005, and earned a strong HK$6,230,000 in its first three days. It ended its run with HK$17 million, making it the third highest-grossing domestic release in Hong Kong that year, and overseas for a worldwide total of ￥120 million.