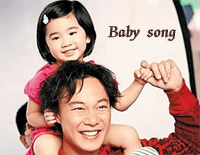 Baby Song is sung by Eason Chan, a prominent male singer in Hong Kong's music industry. Eason Chan has been praised by Time magazine as a front runner in the next generation of Cantopop. He is considered by some to be Hong Kong's third "god of song" after Samuel Hui and Jacky Cheung. In 2012, Time Out Hong Kong crowned Chan as the "King of Asian Pop".


Baby Song is well known by people and if you like it, you can also download Baby Song sheet music to play with Everyone Piano. Just Enjoy It!