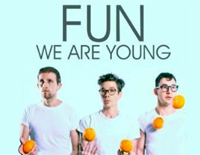 We Are Young Related Videos

We Are Young Introduction

Free We Are Young piano sheet music is provided for you. So if you like it, just download it here. Enjoy It!

We Are Young is a song recorded by American band Fun for their second studio album Some Nights (2012). It was released on September 20, 2011 as the lead single from Some Nights. Musically, "We Are Young" is an anthem that incorporates the genres of indie pop, alternative rock, and power pop. The song received generally positive reviews from music critics, with many noting the song as a breakthrough for the indie genre and praising the song's catchiness. "We Are Young" has attained commercial success worldwide, reaching number one in several countries.


The track initially only gained attention from online media, although it did receive its first commercial radio airplay on Tampa Bay alternative radio station, 97X, debuting on September 19, 2011. However, it was soon covered by the television show Glee. With the Glee version having success on the charts, the song was licensed for use in a Chevrolet Sonic commercial that aired during Super Bowl XLVI.

We Are Young Stave Preview ( Total 7 )

We Are Young EOP File