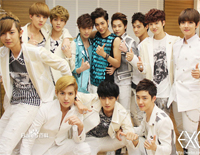 Baby Don't Cry is sung by Exo who is a South Korean-Chinese boy band produced by S.M. Entertainment. Formed in 2012 in Seoul, South Korea, Exo consists of twelve members, who are separated into two subgroups, Exo-K and Exo-M, promoting their music in both South Korea and China. Their name was taken from exoplanet, a term referring to planets outside of the Solar System. Their debut single Mama was released on April 8, 2012, followed by the release of their debut EP Mama on April 9, 2012.

And Baby Don't Cry was included in their first studio album XOXO, released on June 3, 2013 by S.M. Entertainment. The album is a follow-up to the group's debut EP, Mama (2012). Like all of the group's music, the album was released in two versions – a Korean "Kiss" edition and a Chinese "Hug" edition.

The song is really popular and if you like it, you can also download free Baby Don't Cry sheet music to play with Everyone Piano. Just Enjoy It!