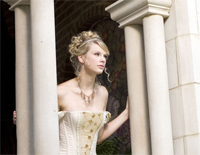 Free Love Story piano sheet music is provided for you. So if you like it, just download it here. Enjoy It!

Love Story is a country pop song performed by American singer-songwriter Taylor Swift. The song was written by Swift and produced by Nathan Chapman, alongside Swift. It was released on September 12, 2008 by Big Machine Records, as the lead single from Swift's second studio album Fearless. The song was written about a love interest of Swift's who was not popular among Swift's family and friends. Because of the scenario, Swift related to the plot of William Shakespeare's Romeo and Juliet (1597) and used it as a source of inspiration to compose the song. However, she replaced Romeo and Juliet's original tragic conclusion with a happy ending. It is a midtempo song with a dreamy tenor, while the melody continually builds up. The lyrics are from the perspective of Juliet.
Love Story
was a critical success with critics complimenting Swift's writing style and the song's plot. It was also a commercial success, selling over 8 million copies worldwide, therefore establishing itself among the best-selling singles of all time. In the United States, the song peaked at number four on the Billboard Hot 100 and sold over 5,550,000 paid digital downloads, becoming Swift's best-selling single to date and the best-selling download by a female country solo artist. It is also one of the best-selling singles in the United States and was once the best-selling digital country single of all time there. The single was certified quintuple platinum by the Recording Industry Association of America (RIAA). Internationally, "Love Story" became Swift's first number one single in Australia, followed by "We Are Never Ever Getting Back Together" in 2012. The song has been certified triple platinum by the Australian Recording Industry Association (ARIA).

If Xiao Bian loves a song, Xiao Bian likes to see what it happens not included in its MV. As you can see, today is for possiping Love Story. In the MV, you won't miss Tayler's suit that she wears in a hallway. Acturaly that dress is so small for her that she almost cannot breath.

Another one is about the main actress. One day Tayler watched TV aimlessly, suddenly she saw him who was on a competition then. He is the one, she thoughts. So she managed to contacted him to be her Romeo.

Besides, we offer Look What You Made Me Do，Beauty and the Beast，Flower Dance  to you!

The Lyrics of Love Story:

We were both young when I first saw you.
I close my eyes and the flashback starts:
I'm standing there on a balcony in summer air.

See the lights, see the party, the ball gowns.
See you make your way through the crowd
And say, "Hello, "
Little did I know...

That you were Romeo, you were throwing pebbles,
And my daddy said, "Stay away from Juliet"
And I was crying on the staircase
Begging you, "Please don't go"
And I said...

Romeo, take me somewhere we can be alone.
I'll be waiting; all that's left to do is run.
You'll be the prince and I'll be the princess,
It's a love story, baby, just say, "Yes".

So I sneak out to the garden to see you.
We keep quiet 'cause we're dead if they knew
So close your eyes... escape this town for a little while.
Oh, oh.

'Cause you were Romeo - I was a scarlet letter,
And my daddy said, "Stay away from Juliet"
But you were everything to me,
I was begging you, "Please don't go"
And I said...

Romeo, take me somewhere we can be alone.
I'll be waiting; all that's left to do is run.
You'll be the prince and I'll be the princess.
It's a love story, baby, just say, "Yes".

Romeo, save me, they're trying to tell me how to feel.
This love is difficult but it's real.
Don't be afraid, we'll make it out of this mess.
It's a love story, baby, just say, "Yes".

I got tired of waiting
Wondering if you were ever coming around.
My faith in you was fading
When I met you on the outskirts of town.
And I said...

Romeo, save me, I've been feeling so alone.
I keep waiting for you but you never come.
Is this in my head? I don't know what to think.
He knelt to the ground and pulled out a ring and said...

Marry me, Juliet, you'll never have to be alone.
I love you, and that's all I really know.
I talked to your dad - go pick out a white dress
It's a love story, baby, just say, "Yes".

'Cause we were both young when I first saw you