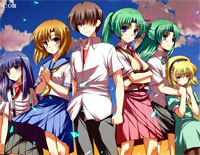 You numbered musical notation and stave are corresponding completely which is suitable for EOP Demon Training Camp members to practice!


You is one of original soundtracks of Higurashi no Naku Koro ni Kai Original which was first released by Lantis on August 23, 2006.

Higurashi When They Cry (ひぐらしのなく頃に Higurashi no Naku Koro ni?, lit. When the Cicadas Cry), known simply as When They Cry for the North American release of the anime adaptation, is a Japanese murder mystery dōjin soft sound novel series produced by 07th Expansion.

This music is well known by people and if you like it, you can also download free You sheet music to play with Everyone Piano. Just Enjoy It!