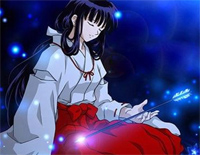 Hiun no Miko Kikyō numbered musical notation and stave are corresponding completely which is suitable for EOP Demon Training Camp members to practice!

Hiun no Miko Kikyō is one of original soundtracks to the anime series Inuyasha.

InuYasha, also known as InuYasha, a Feudal Fairy Tale, is a Japanese manga series written and illustrated by Rumiko Takahashi. It was adapted into two anime television series produced by Sunrise. The first was broadcast for 167 episodes on Yomiuri TV in Japan from October 16, 2000 until September 13, 2004. The second series, called Inuyasha: The Final Act, began airing five years later on October 3, 2009 to cover the rest of the manga series and ended on March 29, 2010 after 26 episodes. Four feature films and a original video animation have also been released. Other merchandise include video games and a light novel. Viz Media licensed the manga, the two anime series, and movies for North America.

This music is well known by people and if you like it, just download free Hiun no Miko Kikyō sheet music!