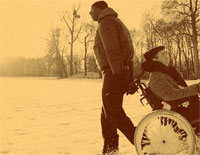 Una mattina is one of episodes song of The Intouchables which is a 2011 French comedy-drama film directed by Olivier Nakache and Éric Toledano. It stars François Cluzet and Omar Sy. Nine weeks after its release in France on 2 November 2011, it became the second biggest box office hit in France, just behind the 2008 film Welcome to the Sticks. The film was voted the cultural event of 2011 in France with 52% of votes in a poll by Fnac. The film has received several award nominations. In France, the film was nominated for eight César Awards and earned Omar Sy the César Award for Best Actor.


And Una mattina is from Italian pianist Ludovico Einaudi's album Una Mattina (2004). He describes Una Mattina by saying "If someone asked me about this album, I would say it is a collection of songs linked together by a story. But unlike my other albums, it doesn't belong to a time in the past. It speaks about me now, my life, the things around me.


The song is well known by Chinese people and if you like it, you can also download free Una mattina sheet music to play with Everyone Piano. Just Enjoy It!

Really sorry our website does not provide any resources to download this song at the request of author or the company with the copyright.

Really sorry our website does not provide any resources to download this song at the request of author or the company with the copyright.