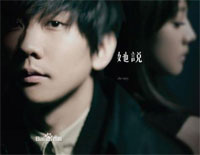 She Says is a song from JJ Lin's Eighth Mandarin studio album with the same name. The album was released on 21 January 2011 by the Ocean Butterflies Music and distributed by Avex Taiwan.


JJ Lin is a Singaporean Mandopop singer-songwriter, composer, and actor based in Taiwan. JJ Lin was managed by Ocean Butterflies from 2003 to 2011. He is managed by Warner Music Taiwan. Lin won Best New Artist for his work on his debut album Music Voyager at the 15th Golden Melody Awards in 2004.


In this album, JJ Lin will be covering 10 songs that he had written for other female singers. Some of these songs includes five songs which he performed at the Golden Melody Awards ceremony this year. At the awards, he gave a stunning performance of songs that were nominated ”Best Mandarin Album” award.


She Says is well known by Chinese people and if you like it, you can also download free She Says sheet music to play with Everyone Piano. Just Enjoy It!