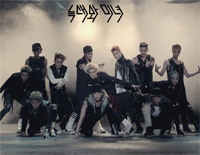 Wolf (Korean: 늑대와 미녀; simplified Chinese: 狼与美女; traditional Chinese: 狼與美女) is a song performed by South Korean-Chinese boy band Exo. Available in both Korean and Mandarin Chinese, the song was digitally released on June 3, 2013 under the label of S.M. Entertainment. "Wolf" was also chosen to be promoted as the lead single from the Korean and Mandarin versions of group's first studio album XOXO.


It was announced on May 22, 2013, that "Wolf" would be the title track and lead single from their first album and the first performance of Korean version will be on the episode of M.net M! Countdown on May 30, four days ahead of actual album release. This was then followed by performances on KBS Music Bank on May 31 and MBC Show! Music Core on June 1. After their third performance on SBS Inkigayo on June 03, 2013, Exo decided to visit and thank 2,000 fans who had been waiting at a nearby park to meet them. The first performance of the Mandarin version of the song is scheduled to be aired on a popular Chinese variety show Happy Camp in mid-June.