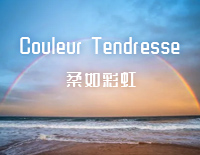 
"Couleur Tendresse" is well known by people and if you like it, you can also download the free Couleur Tendresse sheet music to play with Everyone Piano. Just Enjoy It!