The Friendship of Pipe-The Rooftop OST 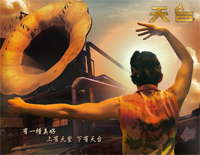 The Friendship of Pipe numbered musical notation and stave are corresponding completely which is suitable for EOP Demon Training Camp members to practice!

The Friendship of Pipe
is used as an insert song to 2013 Taiwanese film The Rooftop.

The Rooftop is one of the many scripts that Jay Chou has written since the success of Secret in 2007. Most of the scripts are sequels to Secret. However, Jay Chou and his long-time friend Will Liu decided to work on The Rooftop as a challenge to produce the first Chinese mainstream musical-come-martial arts film. They claimed that The Rooftop is a film that is difficult to be categorized, for it combined the elements of musical extravaganza and actions.


Free The Friendship of Pipe piano sheet music is provided for you. So if you like it, just download it here. Enjoy It!