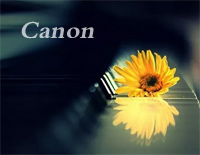 Free Canon in C Major piano sheet music is provided for you. So if you like it, just download it here. Enjoy It!

Canon in C Major
is a different version of Canon which is created by German composer Johann Pachelbel. During his lifetime, Pachelbel was best known as an organ composer. He wrote more than two hundred pieces for the instrument, both liturgical and secular, and explored most of the genres that existed at the time. Pachelbel was also a prolific vocal music composer: around a hundred of such works survive, including some 40 large-scale works. Only a few chamber music pieces by Pachelbel exist, although he might have composed many more, particularly while serving as court musician in Eisenach and Stuttgart.

In music, a canon is a contrapuntal compositional technique that employs a melody with one or more imitations of the melody played after a given duration (e.g., quarter rest, one measure, etc.). The initial melody is called the leader (or dux), while the imitative melody, which is played in a different voice, is called the follower (or comes). The follower must imitate the leader, either as an exact replication of its rhythms and intervals or some transformation thereof (see "Types of canon", below). Repeating canons in which all voices are musically identical are called rounds – "Row, Row, Row Your Boat" and "Frère Jacques" being widely known examples.


Meanwhile, we also offer different version of Canon sheet music for you to download
[ + More Information ]