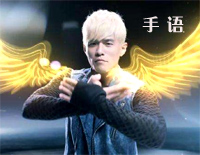 "Sign Language" is one of tracks of "Opus 12 " Chinese: 十二新作; pinyin: shí èr xīn zuò) which is Taiwanese Mandopop artist Jay Chou's twelfth Mandarin studio album. It was released on 28 December 2012 by JVR Music and distributed by Sony Music Entertainment Taiwan. The album was first announced on 29 November, and preorders began on 12 December. The album was released with a bonus DVD containing the music videos of "紅塵客棧" (Mundane Inn), "公公偏頭痛" (Gong Gong with a Headache) and "大笨鐘" (Big Ben). There are three versions to this album; normal (平裝版), Deluxe Package (精裝版) and USB (USB版).