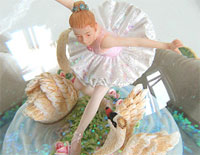 "Music Box Dancer"  is an instrumental piece by Canadian musician Frank Mills that was an international hit in the late 1970s. It features a piano theme that is accompanied by other instrumentation, designed to resemble a music box.


"Music Box Dancer" has been recorded by such pianists as Floyd Cramer, Richard Clayderman, Roger Williams and Eric Robertson, and by orchestral artists such as James Last and 101 Strings. Bandleader Ray Conniff added lyrics and titled the song for his album I Will Survive in 1979. A calypso version was recorded by Germany's Roberto Delgado, while in Sweden, an accordion version was released. The band PePe produced a techno version. The Wiggles covered this song on the video/album, Racing to the Rainbow.


"Music Box Dancer" is well known by people and if you like it, you can also download free Music Box Dancer sheet music to play with Everyone Piano. Just Enjoy It!