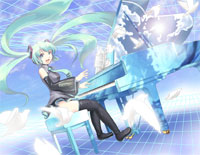 "Uta ni Katachi wa Nai Keredo" (歌に形はないけれど, A song does not have the form) is sung by Hatsune Miku (初音ミク) who is the first Japanese Vocaloid in the Vocaloid Character Vocal Series, the third Japanese Vocaloid created by Crypton Future Media, and the seventh Vocaloid to have be created overall. Released on August 31, 2007, she is considered the most popular and well known Vocaloid and the first to become a pop idol. The data for the voice was created by sampling the singing of Saki Fujita (藤田 咲, Fujita Saki), a Japanese voice actress.