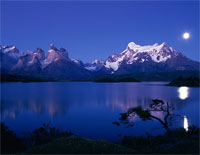 "Moonlight Bay" is one of tracks of the same name ablum from Bandari who is a New Age music band on the AVC Audio Video Communications AG record label of Au, Switzerland. However, the group is known only in China and Taiwan.


Bandari released its first album in 1990 and has published over 20 albums all around the world. China's Jingo Records has now released 13 of Bandari's albums. Compared with other New Age Music musician such as Yanni, Kitaro or Enigma, Bandari produces music with slower and softer rhythm. Many people relax by listening to Bandari's music.


"Moonlight Bay" is well known by people and if you like it, you can also download free Moonlight Bay sheet music to play with Everyone Piano. Just Enjoy It!