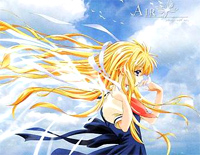 "Kawa" (川 River) is one of tracks of "Air" which is a visual novel developed by Key and published by Visual Art's in 2000. The story follows Yukito Kunisaki, a traveler who arrives in a quiet seaside town during summer who is on a search for the "girl in the sky" that his now-deceased mother told him about and was searching for too. In town, Yukito meets three strange girls and Yukito begins to suspect that one of them may in fact be the girl he has been searching for. It was adapted by Toei Animation into an animated film in 2005 directed by Osamu Dezaki with music direction by Yoshikazu Suo. Kyoto Animation also adapted it into a 13-episode anime television series broadcast in 2005, along with an additional two episodes also broadcast in 2005, directed by Tatsuya Ishihara with music direction by Shinji Orito. The discography of Air and its anime adaptations consists of one EP, one single, two soundtracks, and three remix albums.


"Kawa" is well known by people and if you like it, you can also download free Kawa sheet music to play with Everyone Piano. Just Enjoy It!