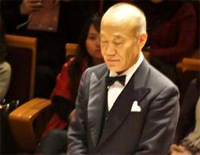 Dreamy Child is composed by Mamoru Fujisawa, known professionally as Joe Hisaishi (born December 6, 1950), who is a composer and director known for over 100 film scores and solo albums dating back to 1981.


"Dreamy Child" is well known by people and if you like it, you can also download the free Dreamy Child sheet music to play with Everyone Piano. Just Enjoy It!