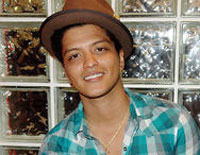 "Grenade" is a song performed by American singer-songwriter and producer Bruno Mars from his debut studio album Doo-Wops & Hooligans.

"Grenade" first debuted on the Billboard Hot 100 the week of October 16, 2010 at number 81 and climbed the chart to number five for the week ending December 18, 2010. On January 8, 2011, it peaked at number 1, making it Bruno Mars' third number one single on the chart, the others being B.o.B's "Nothin' on You", on which he was featured, and "Just the Way You Are". In January, 2011, it became his second solo single to top the 2 million mark in paid downloads.  It was Mars' second single to sell over 5 million, just a week after "Just the Way You Are" achieved that feat, and it was only the third time in Billboard history that back-to-back singles have both sold 5 million copies in the digital era. The song spent 36 weeks on the Hot 100.

"Grenade" is well known by people and if you like it, you can also download free Grenade sheet music to play with Everyone Piano. Just Enjoy It!


Besides, we offer Just The Way You Are, Marry You to you!
[ + More Information ]