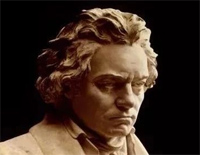 "Symphony No. 5 in C minor" of Ludwig van Beethoven, Op. 67, was written in 1804–1808. It is one of the most popular and best-known compositions in classical music, and one of the most frequently played symphonies. First performed in Vienna's Theater an der Wien in 1808, the work achieved its prodigious reputation soon afterwards. E. T. A. Hoffmann described the symphony as "one of the most important works of the time".


This is the first movement: Allegro con brio. The first movement opens with the four-note motif discussed above, one of the most famous in western music. There is considerable debate among conductors as to the manner of playing the four opening bars. Some conductors take it in strict allegro tempo; others take the liberty of a weighty treatment, playing the motif in a much slower and more stately tempo; yet others take the motif molto ritardando (a pronounced slowing through each four-note phrase), arguing that the fermata over the fourth note justifies this. Some critics consider it crucial to convey the spirit of and-two-and one, as written, and consider the more common one-two-three-four to be misleading.

Symphony No. 5 in C Minor First Movement-Leave a comment