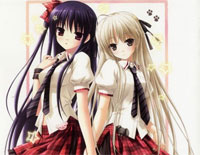 
"Kioku" (ヨスガノソラ メインテーマ "Memory") is one of the BGMs of "Yosuga no Sora" (ヨスガノソラ, lit. Sky of Connection) which is a Japanese romance/drama adult visual novel developed by CUFFS ("Sphere"). The game was originally released for Windows PC on December 5, 2008. It was adapted into a serialized manga and an anime TV series. A sequel/fan disk titled Haruka na Sora was released later on October 24, 2009, which contains new and expanded scenarios for several characters from the original game.


The album was awarded one of the Top 10 Selling Mandarin Albums of the Year at the 2003 IFPI Hong Kong Album Sales Awards, presented by the Hong Kong branch of IFPI. Download free Kioku sheet music now!