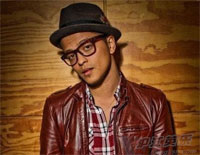 
"Runaway Baby" is a song by American singer and songwriter Bruno Mars, which appears on his debut studio album Doo-Wops & Hooligans. It was written by Mars and Brody Brown and produced by The Smeezingtons. The song peaked at number 19 on the UK Singles Chart on October 30, 2011, after Mars performed the song on The X Factor results show on October 30, 2011. "Runaway Baby" was used as the opening theme for the film Friends with Benefits. The song was also chosen as part of the soundtrack of the movie Escape From Planet Earth in 2013.


Peter Gene Hernandez (born October 8, 1985), known by his stage name Bruno Mars, is an American singer-songwriter and record producer. Raised in Honolulu, Hawaii, by a family of musicians, Mars began making music at a young age and performed in various musical venues in his hometown throughout his childhood. He graduated from high school and moved to Los Angeles, to pursue a musical career. Mars produced songs for other artists, joining production team The Smeezingtons. Download free Runaway Baby sheet music now!