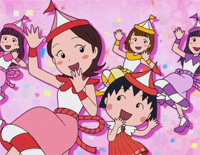 }
Free Odoru Pompokolin piano sheet music is provided for you. So if you like it, just download it here. Enjoy It!

Odoru Pompokolin is a song by Japanese pop group B.B.Queens, serving as their debut single on April 4, 1990. It was used as the original ending theme of the anime series Chibi Maruko-chan. On July 9, 1990, "Odoru Pompokolin" reached the top of the Oricon Singles Charts, and again on July 23, on August 20, before serving as the number 1 weekly song throughout the month of September 1990. It ultimately remained on the charts for a total of 54 weeks, sold 1.9 million copies, and won both record of the year and pop rock song of the year at the 32nd Japan Record Awards as well as the 1991 JASRAC Award.

Covers include an uptempo happy hardcore version which was featured on Anime Speed, a heavy metal cover by Animetal on their fanclub exclusive "For the Bravehearts Only!" single, an English-language version titled "Dancing Pompokolin" by Captain Jack which was featured in the game Dance Dance Revolution and other music games, a version by ManaKana used as the Chibi Maruko-chan opening theme song from 1998 to 2000, and a cover by Kaela Kimura on her album 5 Years which has been used as the opening for the anime throughout 2010.