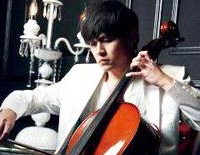 }
Free Silence piano sheet music is provided for you. So if you like it, just download it here. Enjoy It!

Silence is a song performed by Jay Chou who is a Chinese musician, singer, songwriter, music and film producer, actor and director.

Although he was trained in classical music, Chou combines Chinese and Western music styles to produce songs that fuse R&B, rock and pop genres. He composes all his own songs, as well as songs for other singers. In 2000, Chou released his first album, titled Jay, under the record company Alfa Music. Since then he has released one album per year except in 2009, selling several million copies each. His music has gained recognition throughout Asia, most notably in regions such as Taiwan, China, Hong Kong, Japan, Malaysia, Indonesia, India, Singapore, Thailand, Vietnam and in overseas Asian communities.

And Silence is from his second Mandarin studio album Fantasy which was released on 14 September 2001 by Alfa Music and distributed by Sony Music Taiwan.

Meanwhile, we also offer different version of Silence-Jay Chou sheet music for you to download